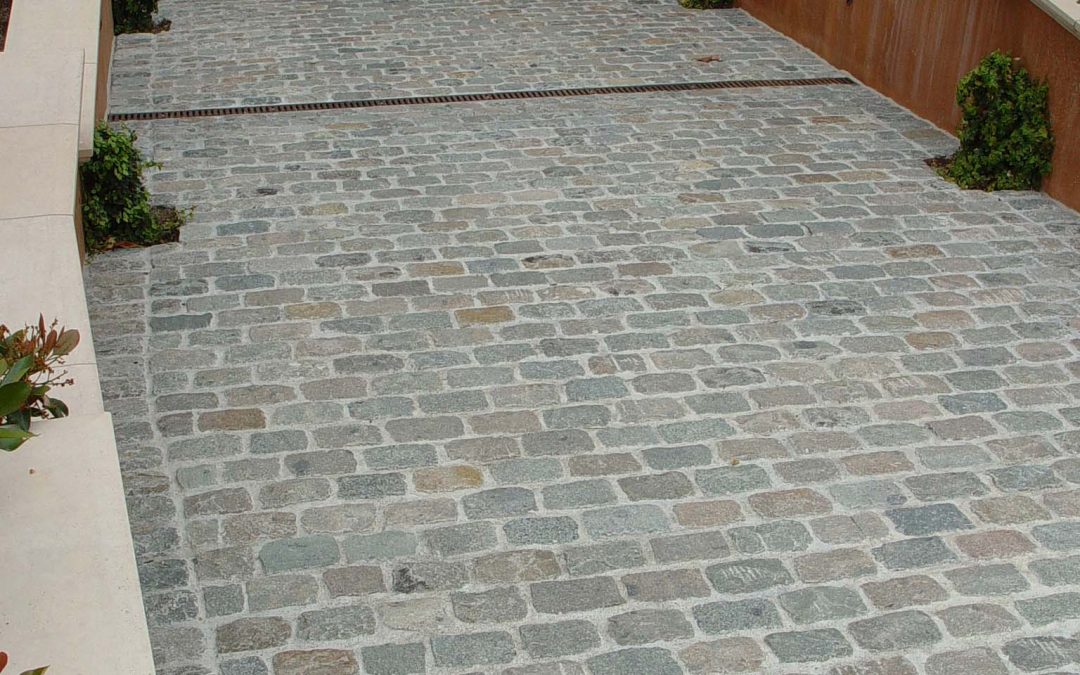 Belgian Block or Belgium Block, is a general term used to describe very large, usually rectangular shaped (9” up to 12″ long) quarried stones, which have little affiliation with Belgium itself.

Back when European ships set sail from ports such as Antwerp in search of goods to trade, they’d sometimes use large blocks of stone as ballast for ships that were too light. When a ships belly would be filled with goods purchased, the blocks of stone would be left behind. Several U.S. port cities happily benefited, paving the roads of towns in Boston, New York, Charleston and others. These simple blocks are mostly dark gray and large, 9” to  12″ long x varying widths and heights.

There were several port cities here in the U.S., both west coast (Portland/Seattle/San Francisco) and east, that locally quarried and cut their own large, ‘Belgian Block’ size stones for city streets. Today, whether newly quarried or antique/reclaimed, domestic or imported from Europe, these very large granite rectangle stones used for paving, might be referred to as Belgian Block or Belgium Block.

But are they cobblestones? Today, it has become commonplace to hear the word ‘cobblestone’ being used to refer to any large rectangle shape. The word cobblestone historically comes from the blending of two words, cob and stone. The word cob in Old English meant a “rounded lump”. “Cobble” appeared in the 15th century adding the suffix “le” to “cob”, furthering the description of  small stones rounded by the flow of water. It was these smooth rounded “cobbles” gathered from stream beds, that paved the first “cobblestone” streets as far back as the Roman times. They were however very uncomfortable to travel over, and soon lost their appeal, giving way to hand-cut or ‘dressed’, relatively flat paving stones called setts or cubes. Setts and cubes – originally British terms, refer to stones that were cut into either smaller sized rectangles (sett) or squares (cubes), used for centuries throughout city and village streets in Britain, Germany, Belgium and the rest of Europe.

With time, the true meaning of these terms have given way to what we here in the U.S. generically refer to, as cobblestone which is the accepted term given to paving stones whose length and/or width should not usually be greater than twice the thickness.

If the idea of charming, classic cobblestones, Belgian or Belgium Block for your residential or commercial project, is appealing, you’re in the right place!  For authentic antique European cobble or curb, visit Historic European Cobblestone to learn more about the tremendous varieties/sizes and colors that are available to order. Visit our gallery pages to view the many options we proudly import nationwide!