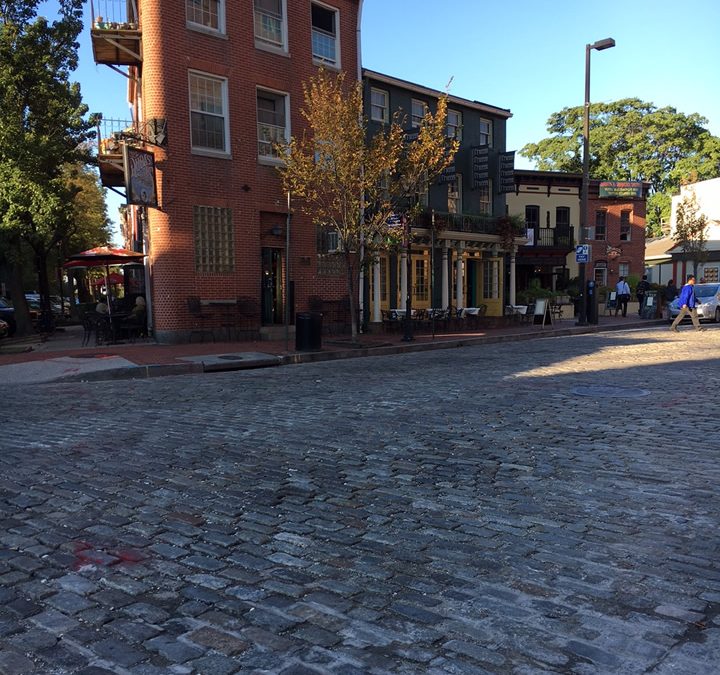 Fells Point cobblestone streets – a trip back in time!

I had the distinct feeling of being transported back in time during a visit to the charming cobblestone paved waterfront neighborhood of Fell’s Point in Baltimore MD. Fells Point is named after the Englishman William Fell, who founded a ship-building company here in 1726 that went on to produce the famous “Baltimore Schooners”. This charming area has waterfront streets – most paved in granite cobblestone – dating from the 18th century.

William Fell purchased the peninsula in 1726, seeing its potential for shipbuilding and shipping. Starting in 1763 his son Edward and his wife, Ann Bond Fell, divided and sold the land. Soon docks, shipyards, warehouses, stores, homes, churches, and schools sprang up, and the area quickly grew into a bustling seaport. 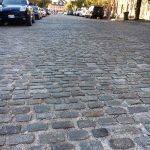 The notoriously speedy clipper ships built here annoyed the British so much during the War of 1812 that they tried to capture the city, a move resulting in Fort McHenry’s bombardment. The notable African-American Frederick Douglass (1818-1895) social reformer, abolitionist, orator, writer, and statesman. worked at a shipyard at the end of Thames Street and lived in Fells Point from 1820 to 1838. Around the 1840s the shipbuilding industry started to decline, in large part because of the rise of steamships, which were being constructed elsewhere.

Today the well-preserved cobblestone streets, stores, restaurants, taverns and homes give you a feeling little has changed since it was founded several hundred years ago. Fells Point has so much to offer, an entire day can easily be filled by wandering the charming cobblestone streets. Walking shoes recommended!.