2013’s Tour de France bike race ended Sunday July 21st. The Brits are proud, as Chris Froome won the grueling 100th  competition. This is the 100th Tour de France which was made up of 21 stages and covered a total distance of 3,404 kilometers, some of it ridden over cobblestone streets such as this image below, taken from a 1950’s era  race. 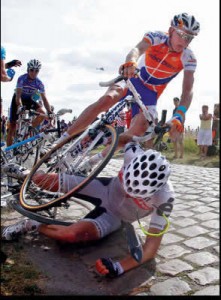 We truly appreciate the effort needed to endure road racing on 1″ wide tires over segments of old cobblestone streets.   Images such as these depict some of the most challenging aspects of the race – just keeping upright!

The U.S.A.’s AndrewTalansky performed very well. Andrew is a 24 year old from Florida who is really turning some heads this year and is sure to be a major competitor in the future. There were several U.S.A. teams competing as well. For more information check out the Tour de France website.
For true ‘Tour’ enthusiasts, take a look at our Historic European Cobblestone collection….by next years race you could be watching it from the comfort of your own patio paved with authentic cobblestone imported from Europe !